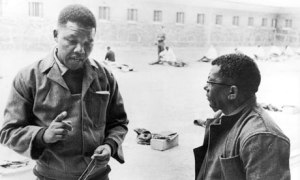 How to begin? Over the past day or so, across the globe, across all sections of all kinds of societies, the voice of individual after individual has paid testimony to the profound significance of Nelson Mandela’s life, and death. Crowds have gathered to sing and dance and celebrate, emulating in their actions the idea of solidarity and shared humanity that his life came to symbolise. I wonder if there is any more I can add to the general outpouring of goodwill of a scale and breadth that it is impossible to imagine any other political figure inspiring.

The death of Margaret Thatcher earlier this year prompted an immediate blogpost on my part. With no time to think it came out as an emotive stream of consciousness – it was easier to write. This time, life and work has forced a delayed response, and that delay seems to demand a thoughtful, considered approach that I don’t quite know how to achieve. Conjuring Thatcher, of course, is not just about her also having died this year, and it is not just about her also having been a towering political figure of our historical moment, and it’s not just about her having dismissed the ANC as a terrorist organisation and having opposed sanctions as a crime against free trade. And it’s not just that the absence of human empathy, which places those Thatcherite ideals of personal wealth accumulation and economic liberalism above all else, is in such stark contrast to the quite extraordinary ideals of truth, reconciliation and bipartisanship which led South Africa’s peaceful transition from apartheid to democracy. For people like me, figures like Mandela and Thatcher, and the events and moments connected with them, have somehow and somewhere along the way coalesced in our brains or our memories to forge and shape our characters, our attitudes, our belief systems, our moral compasses.

What I want to say is that for me Mandela symbolises the idea that there are some things which are so straightforwardly abhorrent that the only possible human response is to resist them. When it came to the South Africa which existed at the time I was becoming politically aware these things were not difficult to recognise – apartheid was so obviously a moral fucking outrage. It had its fair share of apologists and, of course, there were those who were happy to turn a blind eye to its atrocities in the name of making a quick buck – do we all recall Status Quo and Queen playing Sun City, Barclays Bank’s infamous investments, or indeed those of our late Prime Minister’s late husband Dennis Thatcher? But for many of us, it was clear that feigned ignorance was no possible response. We weren’t in South Africa, we weren’t facing the relentless daily degradation of apartheid. We were on the other side of the world, but their struggle felt like our struggle (I guess that’s what empathy means) and it seemed important to do something, however small. So we refused to buy South African produce. We stood vigil outside South Africa House. For years. We went on demos, we went to gigs, we sprayed slogans. Eventually history caught up with us, and when it did, and when from a cold 1990 February day in the UK we watched Mandela walk free from prison, we were moved beyond words. And proud to have been on the right side of history. And we understood the power of solidarity.

Mandela’s final steps towards freedom were accompanied by the unseen ghosts of those who hadn’t made it: Steve Biko and the countless others who had ‘died’ in custody, the children of Soweto who had been gunned down so mercilessly on the streets of their township, all those whose lives had been cut short by the regime. All those who had shown the kind of courage and dignity in their resistance that we all hope we would be capable of. We’ll never know, of course, unless we are tested. And who wants to be tested like that? We need our Mandelas to help us tell our stories and understand our histories, we need those human beings in our world who can rise beyond the ordinary to achieve the extraordinary, and Mandela was without doubt an exceptional human being. But we should not try to sanctify him, and we should remember that all of those people who gave their lives in the struggle against apartheid were potential Mandelas. When Mandela walked out of prison he carried their hopes and dreams with him.

When Thatcher said that there was no such thing as society she was wrong. There is nothing but society. None of us is self-sufficient, everything we do, or buy, or use, or think, or love is connected to someone else. It is how the human race has constructed itself. Perhaps today, in our increasingly complex and global society, it is not so easy to recognise those things that are straightforwardly abhorrent – perhaps challenging or changing or resisting them is not so straightforward. How will history judge, for example, our embracing of neo-liberal economics when every time we buy ‘competitively’ priced goods we are tacitly condoning child labour and sweatshop conditions somewhere else in the the world? These are complicated times. Let’s remember, though, that Nelson Mandela was not some kind of straightforward Christ-like figure. Yes, with his capacity for dignity and moral courage, decency and compassion, forgiveness and empathy, he has come to symbolise the best of humanity. But he was also a fighter, a thinker and a political strategist. Perhaps the best way to honour his life would be try like hell to harness all of these traits and direct them at the profound social injustices which taint our world today.

In the meantime let’s celebrate his life and take a little trip down memory lane.